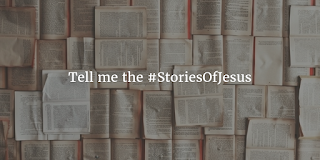 I was thinking yesterday again about how the Christian community sometimes works today versus how it started in the time of Jesus and the early Church. It's amazing really how very different our contexts are, sometimes making sense of what they're talking about in the Bible can be different - and I have lived most of my life in a rural setting, what about people who live in ultra-urban areas now, how easy can it be to relate to the tales of Jesus for them?

One thing I always used to love in the church I grew up in was that nearly every Sunday evening service there would be opportunity for "testimony" for people to share how God was moving in their life today. (Note, when I grew up it wasn't unusual in The Salvation Army to have at least 2 services on a Sunday, 3 if you include the "open-air" service in the town immediately before the evening service in the summer months.)

Yesterday I was reminded of the words of the song:


Tell me the stories of Jesus I love to hear;
Things I would ask Him to tell me if He were here;
Scenes by the wayside, tales of the sea,
Stories of Jesus, tell them to me.

I want to challenge you, without looking at your Bible, remember one of the old stories of Jesus and tell it in your own words; then tell a story of the living Jesus and what he's doing today. If you're on social media, please share it with the hashtag #StoriesOfJesus. Maybe this could become a weekly tradition?

One story I remember is the one where he's on the boat with the disciples. They've had a busy time and they're trying to get from one village to the next. Jesus is asleep in the front of the boat and the disciples, the majority of whom were seasoned fishermen, get very worried when a huge storm sets in. Lake Galilee is apparently known for it's sudden and very violent storms. The fishermen are worried, the landlubbers are scared, Jesus is asleep. This isn't the very start of their adventure with Jesus, though, they've seen him do amazing things; so maybe he can help. With a mixture of fear, hope, faith, expectation and a little bit of anger because he didn't just fix it, they beg him to save them. He looks at them in utter amazement, they don't quite realise who he is; he isn't going to die in a boat, his future has been foretold. He calms the storm with a simple "be still" and shows them again how much power is available to him. Not forgetting that later he tells them that everything he did, they will do even more and even bigger through the power of faith. Pretty amazing!

I've been rereading through the stories of Jesus recently, just getting to know him a little better. It's been nice to be reminded that he wasn't the glowing soft Jesus we sometimes see in the pictures; he was gentle but firm, a leader, a teacher, a man who felt anger. He killed off a fig tree because there was no fruit on it! He was the kind of man that you'd love to visit with, have a meal with. He was the life of the party and a loving friend. He was a healer, helper to all mankind. He had no prejudice in a culture that had many. He was a man who set a very high standard for his followers to live to, but he was forgiving and kind. He's the sort of man you'd love to be more like. I guess that's my Jesus story for now, just that I'm still able to get to know him more.

So I'd love to see/hear your Jesus stories - one from when he walked the earth and another from now. Your turn! I'll try and do this regularly, if I can, no promises though!
Posted by Unknown at 16:56