A fabulous week with family

When I originally started writing this post I got very excited that I'd managed two weeks in a row, but unfortunately life happened and it's taken me from Saturday until now to finish it. Oh well, I tried...

This week, from Saturday to Saturday we had Lucy's sister and brother-in-law (also known as Aunty Siân and Uncle Rich) come and stay with us; I took the Monday and Friday off to spend some quality time with them and we had a fantastic week!

Saturday started by preparing for our guests, after a long and hot journey we weren't sure what they'd want to do, but thankfully they choose wisely: a trip to the beach. 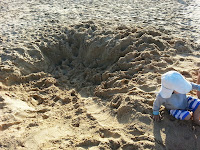 We went to Carbis Bay and had tea on the beach (our usual pasta). Despite being late it was still plenty hot enough to get in the water. Later on Isaac found a pre-dug hole and played in it with his aunty and uncle, telling them when to run in and when to get back out.

Sunday we took Uncle Rich to see Heartlands, which was a project his company had worked on, and Isaac showed off his walking in the Red River (Instagram video). 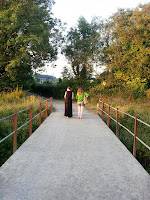 It was a very hot day and we really felt for the guy wearing Victorian dress driving a horse-drawn omnibus. After that Rich had to travel back to Bath for the evening, so the rest of us chilled out in the garden with some help from the paddling pool. This was interesting given the back door is still broken...

Once the evening cooled down we went for a walk through the village.


Monday, my day off, we went to St Ives. We crammed in lots that day, including a train ride, a meal out, cream tea and a trip to the Barbara Hepworth garden (a new one for Lucy, Isaac and I). I'll let the pictures speak for themselves: 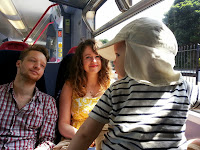 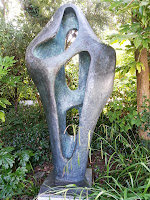 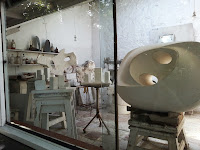 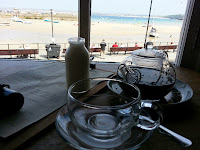 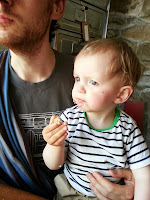 Over the next few days I was back at work and Lucy and Isaac stayed at home to allow our guests to explore on their own. They were on holiday after all! I'm not sure I can remember what we did on Tuesday evening, but I do know that Isaac took his first unsupported steps between the two of us:


Wednesday evening we joined Siân and Rich in Mousehole for a little stroll. The tide was right out, so Isaac made the most of the revealed beach:


That evening Isaac decided he'd rather co-sleep with his aunty and uncle, which made for a pretty cute photo opportunity! 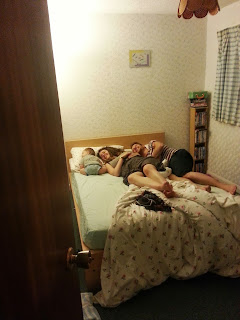 Thursday our guests treated us to a lovely home-made lasagne, despite having spent all day at the beach. Whilst they were busy sweating in the kitchen us three got out of their way and went to one of the parks in the village, although it was far too hot to be outside without any shade... whew! 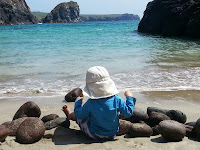 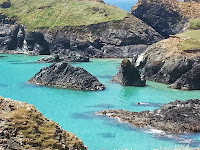 Friday I took another day off and we all headed off to Kynance Cove. Siân and Rich had discovered it earlier in the week, which was exciting as we had never been! Unfortunately the tides weren't on our side and we started out squeezed on the beach - but that was fine as we spent lots of time in the water.

Isaac also practised his walking even more, and really enjoyed walking in and out of the sea! (Google+ animation supplied to prove it)

Despite the wind and the slightly chilly seas it was really nice to spend lots of time in the water.

The plus side of arriving at high-tide was the slow reveal of the next part of the cove. In fact we got a little impatient and walked through chest-height water to get around to it. 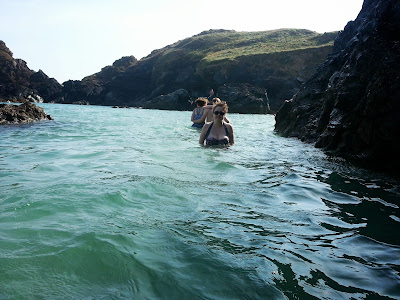 I carried Isaac round on my shoulders, something he loves doing anyway!

Because the tide was still separating several parts of the cove it was like being on a tropical island! There were also bits of beach you could only get to either by walking around the cliffs through water or by walking through caves; very exciting! 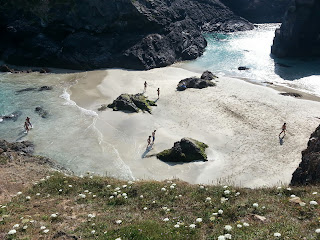 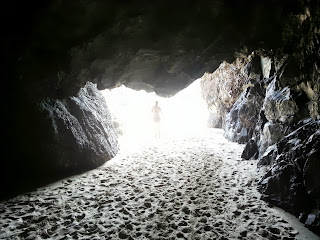 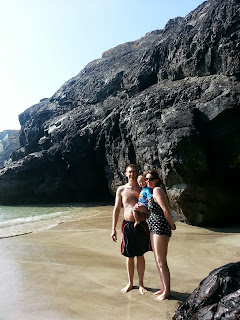 Friday ended with a rather disastrous attempt at a barbecue, but we did our best to enjoy ourselves anyway!

Saturday we had American pancakes for our breakfast and said our goodbyes as our guests headed home. But did we rest? Oh no, we headed down to Penzance for a nice stroll and a go in the big park!

Right... it's taken me so long to type this one that I'd better get working on writing the next weekly summary!
Posted by Unknown at 23:35