So following an adventurous week with family last week was a little quieter, which has it's advantages.

Sunday we went to Godrevy to walk a little further around the headland than we'd been before, which was lovely. We enjoyed seeing the wild ponies grazing around there too and we even managed to see a seal! There are apparently usually loads there but never any when we go, so to see one was a significant improvement!

Also at Godrevy Isaac had his first ice cream! He's had tastes of ice cream before, but between his early dairy problems and the coldness of it he's never been that interested. It was a pretty hot day and we could all do with some cooling down so we got an ice cream. Isaac managed to eat pretty much the whole of his ice cream with only a little help from Mama and Dada, it wasn't what we were expecting!

Monday I had a bright idea and I'm now using IFTTT (If This Then That) to aggregate all of my online activity into a Google Drive spreadsheet, making it easy for me to see at a glance when I come to write this weekly summary. If you haven't come across IFTTT, I wrote an article on it some time ago for geek-speak.co.uk. Other than that it was a quiet day.

Tuesday Canonical/Ubuntu announced the Ubuntu Edge campaign on IndieGogo, and I just had to dream about being able to get involved!

That evening we went to the library to return, renew and checkout books; Tuesday is their late opening day, which means we can get there after I finish work and not feel that we have to rush!

Whilst we were there Isaac decided he would help the staff and rearrange some of the children's books. I took plenty of pictures and Google+ animated it for me!

Thursday the weather turned quite dramatically although it wasn't as stormy as other parts of the country had it. That didn't come until Sunday.

Friday I signed/shared a petition asking for Stricter Controls Over Bumblebee Imports, relating to how some imported bees are bringing parasites into the country and negatively affecting our native populations.

More importantly (!) Friday was our 5th Anniversary! We celebrated at a lovely Italian restaurant in Penzance. 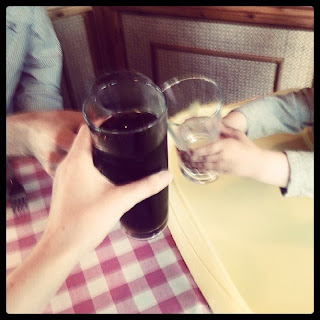 Saturday morning I was at the village Farmers Market, trying to flog some beautiful books. Isaac and I then made the most of the break in the weather to do a bit of gardening, but was rudely interrupted by the ice cream man...
That afternoon despite the weather starting to look a little dodgy we decided to head to Praa Sands to walk a little further along the coastal path than we have previously. It looked like it might rain, but we decided it wouldn't be too bad.

When we got there the weather was glorious. The water was so warm we both regretted not having our costumes! Thank goodness we always carry essentials in the car: bucket and spade, beach shelter and blanket!

Only, it was the wrong type of sand for building sandcastles... too dry: 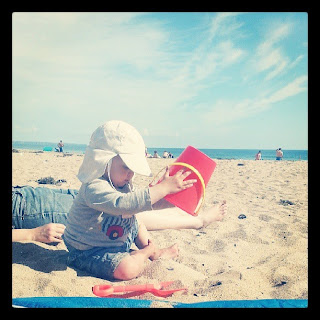 So instead we had lots of fun walking in the sea!

Whew, well it took me until Wednesday to write it all up, better get started on this weeks report!
Posted by Unknown at 09:54